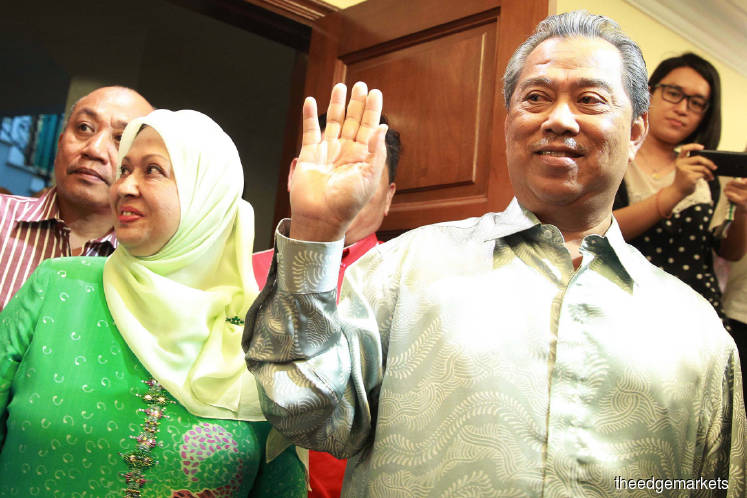 TUN Dr Mahathir Mohamad has described Prime Minister Tan Sri Muhyiddin Yassin’s predicament as that of one riding a tiger. “If he gets off it, he would probably be eaten up. So he has to continue riding no matter how uncomfortable it is.”

If you subscribe to that analogy, then you would probably see Muhyiddin’s Cabinet as an accommodating one — put together to appease the political parties in his coalition, his own supporters and, naturally, a populace that is demanding something really good after the way his government came into power. Lest he be “eaten up”.

Certainly, creating four senior minister posts and doing away with (at least for now) the post of deputy prime minister mark a bold break with tradition.

This can be seen as a sign that Muhyiddin has had to strike a compromise among his allies who have been clamouring for their leaders to be made the DPM. So, he has spread it out among the four blocs of influence. One way to look at it is that the government has four deputy prime ministers. The question of who wields more power is a different matter that can wait for a while.

Several political observers see the creation of four senior minister posts as an indication that there is no consensus as to who should be made DPM. Others see it as a move by Muhyiddin to consolidate power in the prime minister’s hands.

Dr Oh Ei Sun, senior fellow at the Singapore Institute of International Affairs, says, “What it means is that he doesn’t want an obvious successor. So, since so many factions would like to be DPM, might as well defuse the function into four senior ministers. You guys can fight it out but none of you can claim to be my successor.”

The question is, wouldn’t this worsen politicking or encourage infighting?

Political analyst Dr Sivamurugan Pandian, however, feels that the move “might help ease internal conflicts as, for the first time, we see that party presidents have been left out of the Cabinet”.

Notable absentees are Umno president Datuk Seri Ahmad Zahid Hamidi and his PAS counterpart Datuk Seri Abdul Hadi Awang. The inclusion of both would see the new Cabinet facing all sorts of accusations, what with Zahid’s court cases and Hadi being perceived by many, in particular the non-Malays, as a hardline Islamist. As I had said previously, supporters of both leaders had wanted them to be, at the very least, in the Cabinet if not named the DPM.

Somehow, both ruled themselves out by openly calling on the PM not to consider them. In that sense, both spared Muhyiddin the headache of having to make a tough decision, which could have been explosive. Never mind that there are observers who say both “will or can control their people in the Cabinet from the outside”. Well, that’s politics for you.

To Bersatu supreme council member Datuk Dr Rais Hussin, the formation of a presidential council of the Perikatan Nasional coalition is in order. However, it must be able to act collectively and speak in unison, both inside and outside meetings, or there will be trouble.

According to Ilham Centre’s Azlan Zainal, there were obviously compromises made regarding the appointments of former BN Cabinet members, particularly those from Umno and Pakatan Harapan. This was something “very hard for Muhyiddin to ignore”.

Says Siva, “I guess he had to accommodate the different parties in order to maintain stability in the coalition and government structure.”

Speaking of accommodating and compromising, it is hard not to notice the large number of deputy ministers, to the extent of two deputies in some ministries.

And what about PAS? Azlan sees the party adopting a cautious approach by accepting “non-critical portfolios” and instead “focusing on the next general election considering there is still time”.

Still, it cannot be denied that there is disappointment in PAS, in particular at the grassroots level, that the party was only given crumbs, did not get a senior minister’s post and did not land the post of minister in charge of Islamic affairs, which they see as the most suitable role for the party.

An observer puts it simply, “PAS is the biggest loser in this exercise considering their role in helping the current government get to Putrajaya.”

Nevertheless, Muhyiddin has made many concessions for Sabah and, in particular, Sarawak. That is to be expected. Without the support of Gabungan Parti Sarawak, neither would he have made it as PM nor Perikatan Nasional as the government.

But the biggest winner must surely be former PKR deputy president Datuk Seri Azmin Ali. By being appointed one of the four senior ministers in the Muhyiddin administration, he could very well be seen as the de facto DPM. Also telling is Muhyiddin making it known publicly that Azmin will chair Cabinet meetings in his absence. That aside, the 55-year-old’s loyalists who left PKR with him are now holding government posts.

DAP’s Liew Chin Tong, however, sees things differently. Fear is the most important factor underlying Muhyiddin’s Cabinet choices, he says. In his view, the PM is “fearful of his own team members, some of whom were his fellow plotters who brought down the Pakatan Harapan government”.

According to Liew, the PM “is so fearful of Azmin” that the former deputy PKR president, despite being made senior minister has been “demoted” to a “junior portfolio” (ministry of international trade and industry) compared to the all-powerful ministry of economic affairs in the PH government.

Politics aside, there are many appointments, like that of Tengku Zafrul Aziz as finance minister, which ought to be lauded. There are also Education Minister Dr Mohd Radzi Md Jidin and former mufti Datuk Seri Zulkifli Mohamad Al Bakri, Minister in the PM’s Department (religious affairs), whose appointments have been well received.

Therefore, according to Siva, the Cabinet “looks fine with people of different backgrounds teaming up. But they need to deliver and address the needs and demands of the rakyat to build trust and confidence”.

To Azlan, the Cabinet is “perceived as clean”. For that matter, Muhyiddin has told the nation, via his announcement that was carried live on national television, that his Cabinet members “have been cleared by the police and the MACC”.

That is all well and good. But there is one more important question: Considering that the Cabinet is predominantly Malay-Muslim, what about non-Malay and non-Muslim interests? Surely, those must be championed by the MCA and MIC despite their meagre presence in the Cabinet, with a substantial chunk of responsibility shouldered by Cabinet members from Sabah and Sarawak? That is no easy feat.

According to Azlan, Perikatan Nasional is obviously setting its sights on the next general election and will “utilise these two years before GE15” to bolster its popularity.

The task, says Azlan, is daunting, owing to the many challenges ahead. Chief among them is meeting the expectations of the Malay-Muslim community, which has heralded the new government following the demise of the Mahathir-led PH administration.

Bersatu’s Rais admits that while there are sections of the populace that are happy with the change of government, there is also a substantial number of people who are angry. Obviously, their anger is about the way the Muhyiddin administration came to power. Therefore, says Rais, “they must be engaged in anger management”.

With Perikatan Nasional making its entrance smack in the midst of the Covid-19 outbreak and an oil price war, global events are not helping its cause.

Mohsin Abdullah is a contributing editor at The Edge. He has covered politics for more than four decades.