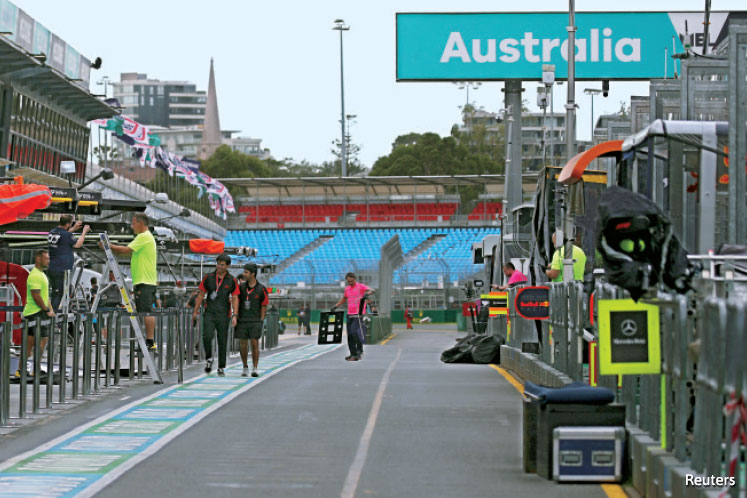 The carnage continues. A world sporting calendar that was merely reeling from coronavirus-induced postponements and closed-door events days ago is now on its knees: Most of Europe’s football is suspended as is America’s NBA, while crown jewels such as football’s European Championships and the Olympic Games are in danger of being counted out.

Some sports accepted their fate gracefully, some even pre-empting government announcements; but there was also a sense of Rome burning while UEFA fiddled over allowing some Europa League matches to go ahead and not others. The English Premier League, meanwhile, is likely to go from “carrying on as normal to possible cancellation”.

Most telling was that Formula One (F1) chose to rage against the dying of the light. It is how its races start, you may jest, but the late and extremely reluctant cancellation of the Australian Grand Prix, scheduled for March 15, was very different: It could mean the lights will go out on the season with the cars still stuck on the grid.

F1 has always been a law unto itself. Milking its vroom and its swagger, it often thrives when it is at war with itself, and there was almost a sense of reassuring normalcy that the circus arrived Down Under in open conflict — seven teams threatening legal action over alleged Ferrari cheating.

That said, F1 never needed a flying start more than this one. But with the Chinese Grand Prix (scheduled for April 19) also cancelled, next weekend’s Bahrain event already behind closed doors (at the time of writing) and severe doubts about Vietnam (April 5), the season can barely splutter.

With most of its early summer races scheduled for a locked-down Europe, the outlook is bleak indeed. For the under-pressure Liberty Media owners, it could be a matter of survival.

It was always going to be a watershed season — some said the most crucial in the sport’s history. No team has signed to renew after this season, although no rival series is yet on the horizon. But long before the virus took hold, the real worry was whether Liberty itself was up to the challenge.

When the US giant bought out former car mechanic, Bernie Ecclestone, for US$4.6 billion in January 2017, a revamp was promised. The sport needed it. Attendances and viewing figures were in serious decline, overtaking was an endangered manoeuvre and many races had become processions.

There was a sameness about some of the circuits and swathes of empty seats in outposts where motorsport just did not belong. Hoist the red flags and bring on the safety car — the glamour sport was starting to lose its looks!

The response has been underwhelming. The would-be American saviours, operating in a different motor sport culture from their own, hit the grid with the safety car still out there, and new CEO Chase Carey, headhunted from 21st Century Fox, proved a different animal from his wily predecessor.

Changes were mere window dressing — a smart new London HQ, a streaming service, new logos and a theme tune — but all they did was increase costs by 35% to US$514 million for the first two years that Liberty was at the wheel.

After the first full year of operations, the share price fell 12% and, despite big promises, doubts persist about Carey’s ability to turn things around. When blue-chip sponsors failed to materialise, investor nervousness was felt by the teams and Carey admitted to The Financial Times: “The world is not that simple.”

Broadcasting is another area of concern. Fears that Liberty cannot juggle the balls of online streaming, pay-TV and free-to-air have mounted, as the drop in the global TV audience has reached a whopping 18% over the last decade.

And what makes the timing of the virus all the harder to take is that, until recently, it had looked as if Liberty might get the season it needed. Not only were all eyes going to be on world champion Lewis Hamilton’s bid to draw level with Michael Schumacher as a seven-time winner, winter testing had suggested a more even contest both at the front and in the middle of the field. There were also two new venues — in Hanoi and Holland.

But now, with little or no racing to distract the contestants, the row that was brewing just before the circus left Europe could boil over. In the last two years alone, there have been complaints about Ferrari’s rear-view mirrors, turbo-charger, battery and even their floor. Indeed, after enhanced screening measures for Italian visitors to Australia were announced last week, the joke in the paddock was that they should apply to Italian cars as well.

What triggered the furious reaction from the seven was the Federation International d’Automobile’s (FIA) hushing up an alleged piece of Ferrari skulduggery in the second half of last season. Rivals had been suspicious of Ferrari’s speed down the straights, which saw them win six pole positions in a row, and duly complained.

When the sport’s governing body acknowledged that what Ferrari were suspected of doing — tampering to bypass the fuel-flow limit — was in fact illegal, the Prancing Horse reined itself in.

With its speed on the gallop duly curbed, it did not secure another pole. After a lengthy investigation, however, the FIA stunned the sport this month when it announced it was keeping its findings to itself and Ferrari in a private agreement.

So, it seems, the Italian marque got away with it yet again, but then favouritism is enshrined in the sport’s constitution — Ferrari being alone in holding a veto over any proposed rule changes.

Where does F1 go from here is now a most pertinent question. The Gulf and back to Asia are still on the calendar but even that would see a lengthy pit-stop before the season got out of second gear. The courtroom might also loom as an unwanted venue. Sympathy has to go to Liberty, for what we are seeing has never occurred before.

This is how esteemed professor Simon Chadwick, director of the Centre for the Eurasian Sport Industry, described the pandemic to Al Jazeera: “In the modern era, this virus has created what is fast becoming an unprecedented situation. Sport has been beset over the last three or four decades by drug bans and boycotts, though nothing matches the scale of the coronavirus ...

“With every match or event cancelled, the industry's economic impact is undermined; revenues from ticket sales are being hit; apparel and sportswear sales are down. For modern commercial sport, there has never been anything like this. It is a test for leaders and managers working in the industry, but also for athletes and participants.”

At a time when famous names are dropping like flies and many organisations are talking of “Armageddon” with looming bankruptcies, F1 will have to accept that it is no different from the rest of sport in being at the mercy of something no one saw coming.

Bob Holmes is a longtime sports writer specialising in football